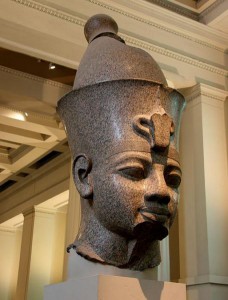 In the third chapter, Osman provides some general information regarding the “Israel Stele.” He points out the famous British archaeologist discovered the granite stele back in 1896 in a funerary temple of Pharaoh Amenhotep III. The funerary temple was located west of Thebes, bearing the name “Israel”.

Osman writes that there had been silence concerning Israel’s co-existence with the Egyptians, but that they “seem to have known many details about Moses and his Exodus. While contemporary pharaonic authorities seem to have deliberately suppressed the mention of Moses and his followers in their records, for more than ten centuries popular traditions kept the story of the man whom Egyptians regarded as a divine being, before it was later recorded by Egyptian priests.”

Osman further points out that under the Macedonian rule, after the death of Alexander the Great in 323 BCE, “Egyptian historians made sure to include the story of Moses and his exodus in their historical accounts.”

The author mentions the historical accounts of Manetho, and how some fragments of his writings have survived through first-century CE Jewish historian Flavius Josephus and through the writings of Sextus Julius Africanus, Eusebius and Plutarch. Osman writes that all of these historians and chronographers agree that:

Some interesting comments concerning how the Egyptians viewed Moses and information regarding Manetho are quoted from the writings of Josephus.

Osman quotes Canadian Egyptologist Donald B. Redford: “What he (Manetho) found in the temple library in the form of a duly authorized text he incorporated in his history; and, conversely, we may with confidence postulate for the material in his history a written source found in the temple library, and nothing more.” {Pharaonic King Lists, Annals and Day Books, Donald B. Redford, Benben Publications, 1986}

Concerning Moses, referred to as a “rebel leader”, already identified as Akhenaten, Osman says that he “abandoned traditional Egyptian polytheism and introduced a monotheistic worship centered on the Aten… [and] erected his new temples open to the air facing eastward; in the same way as the orientation of the Heliopolis.”

Osman again quotes Redford, saying that “a number of later independent historians, including Manetho, date Moses and the bondage to the Amarna period…” it is self-evident that the monotheistic preaching at Mount Sinai is to be traced back ultimately to the teachings of Akhenaten.” {Egypt, Canaan, and Israel in Ancient Times, Donald B. Redford, Princeton University Press, 1993 reprint}

We have another valuable quote from Redford concerning Moses/Akhenaten: “The figure of Osarseph/Moses is clearly modeled on the historic memory of Akhenaten. He is credited with interdicting the worship of all the gods and, in Apion, of championing a form of worship which used open-air temples oriented east, exactly like the Aten temples of Amarna.” {Pharaonic King Lists, Annals and Day Books, Donald B. Redford, Benben Publications, 1986}